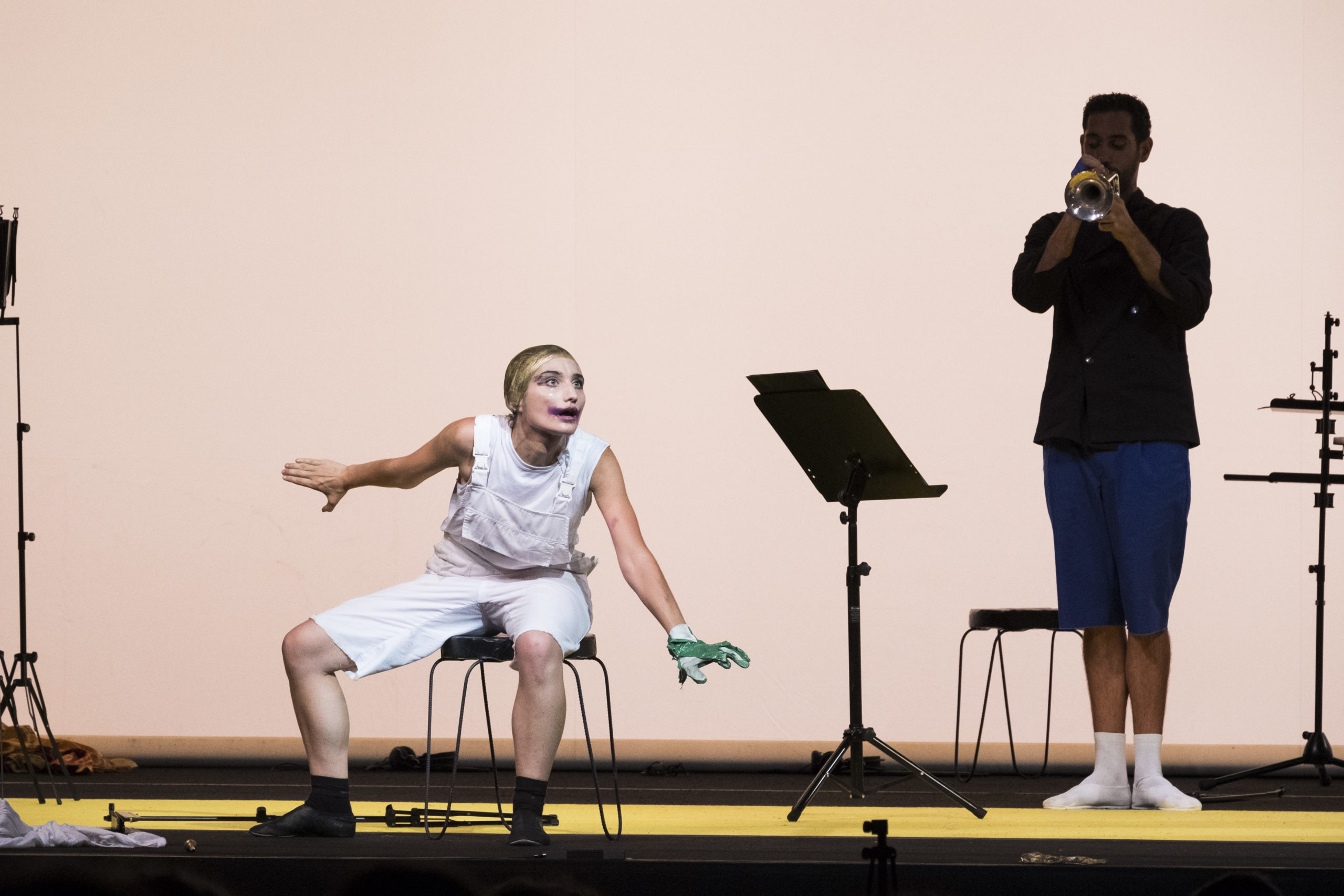 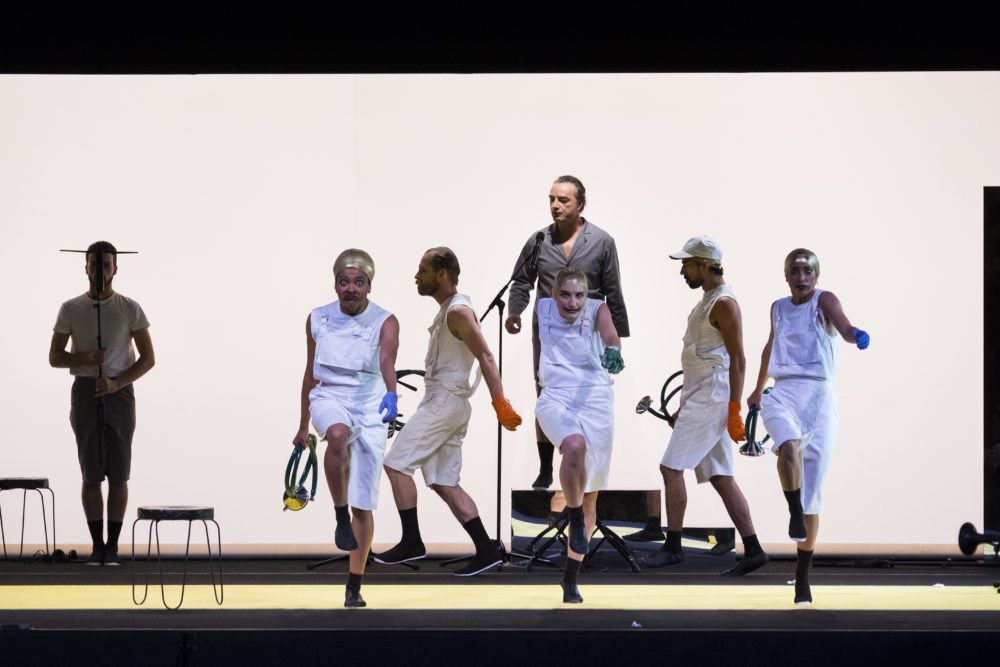 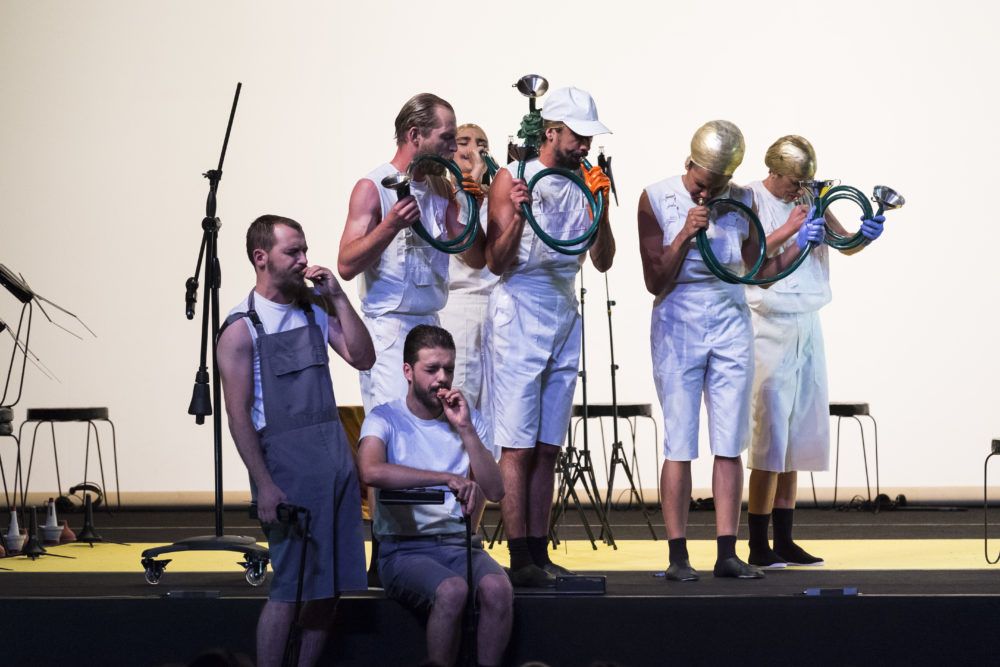 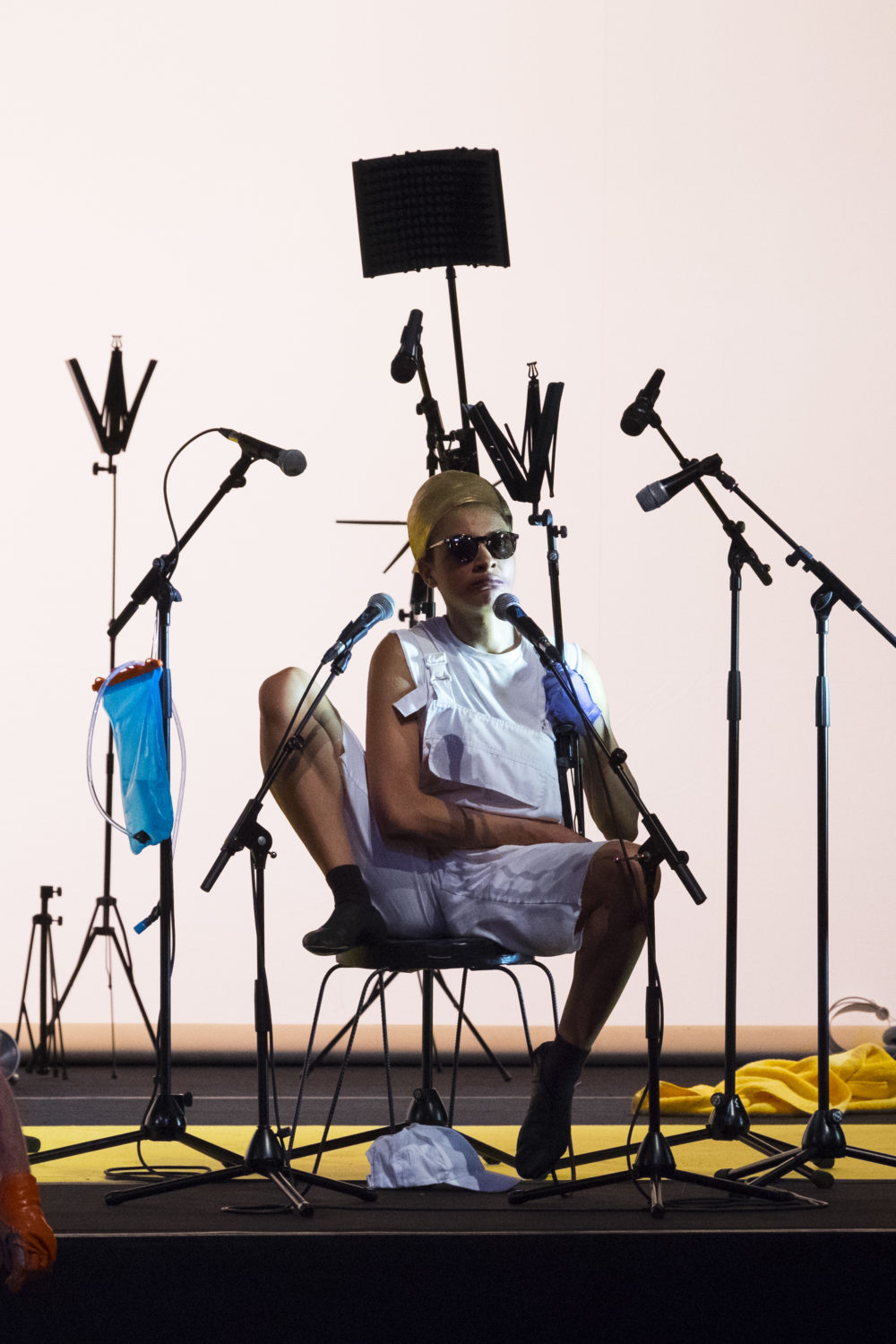 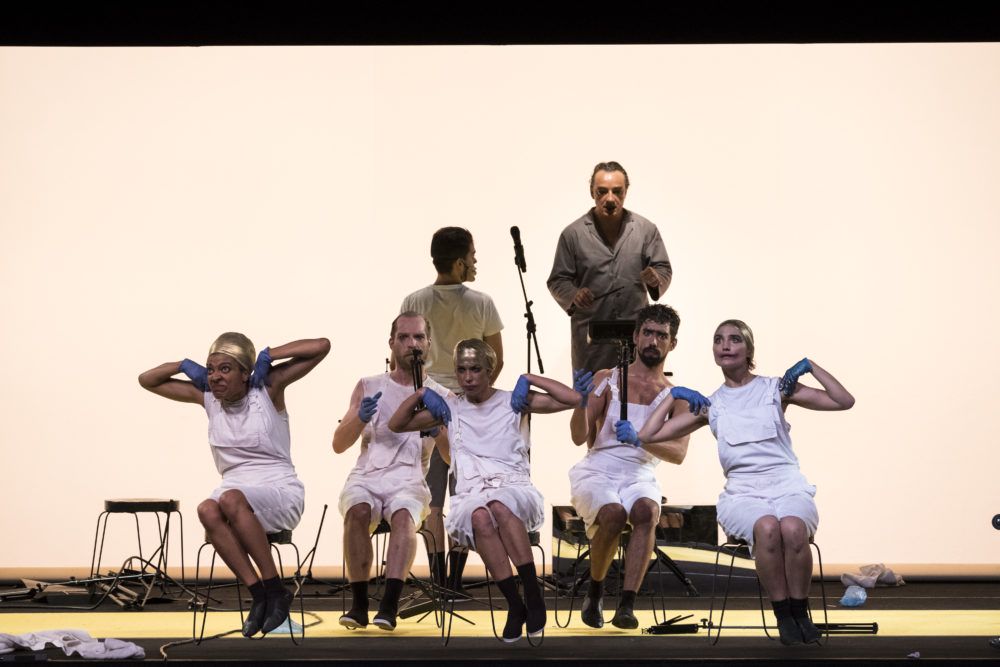 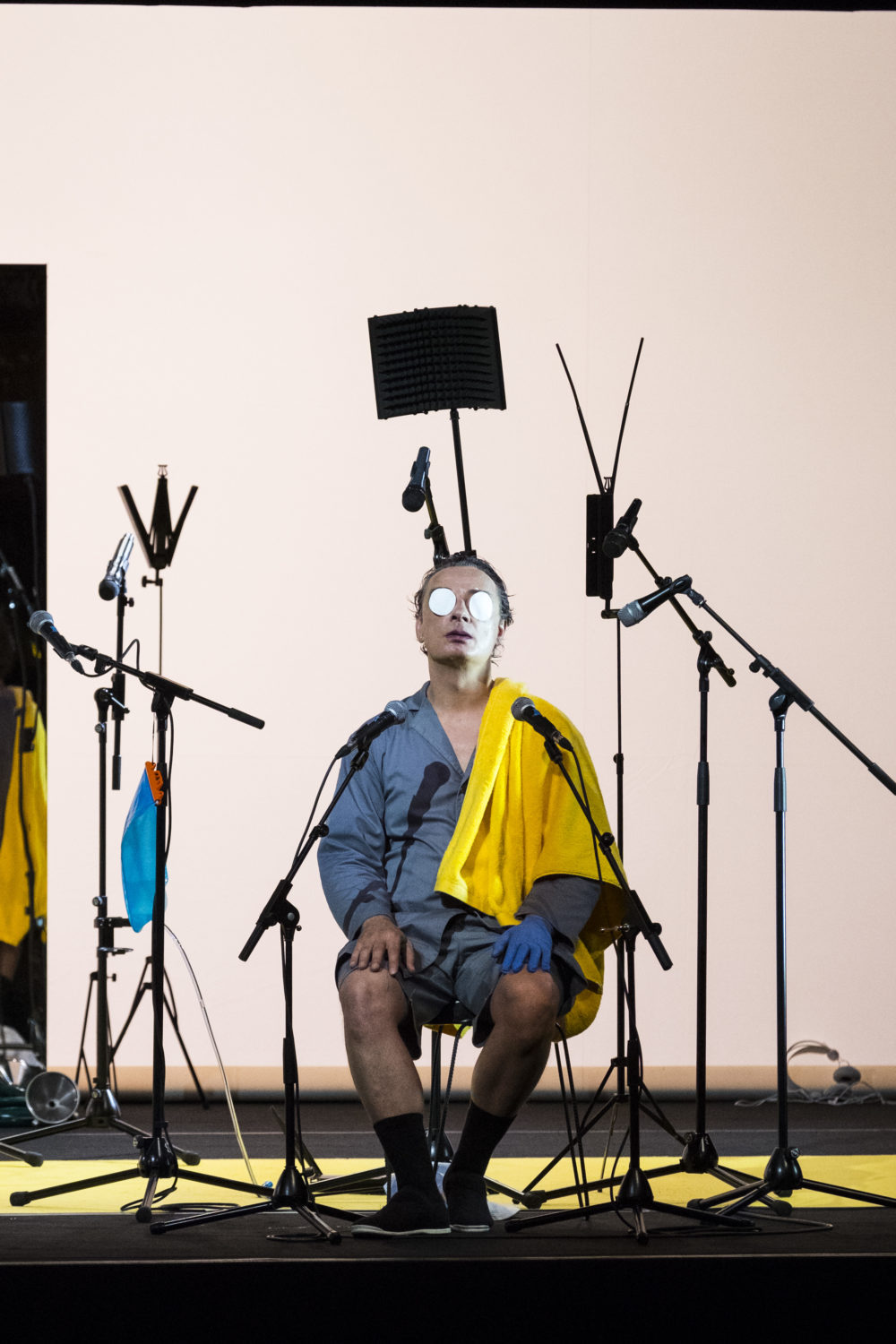 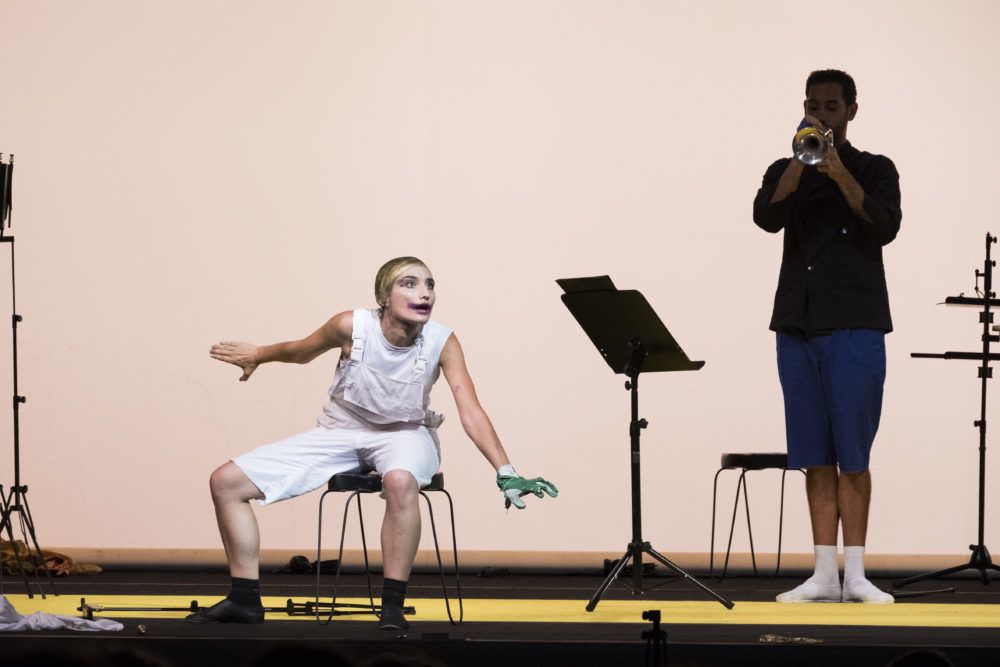 In Euripides, delirium, irrationality, hysteria, madness are traversed, from illusion to blindness and from blindness to revelation. Ferocity and the desire for peace, savagery and the aspiration for a simple and peaceful life are articulated. Opposite and contradictory directions, the clash of elements, utmost ambiguous, dismembered bodies, social statutes put at strain, faith and beliefs stress tested… Miracles!

This is the moral and aesthetic world that the author invites us to traverse and which we accept, leading us to the depths of the human psyche, under forces beyond reason.

In Bacchae – Prelude to a Purge, music, dance and mystery lead us as funambulists over the wire of intensity, in a combat of appearances and dissimulations, polarized between the fields of Apollo and Dionysius.

Bacchae – Prelude to a Purge
Eurypides

For Marlene Monteiro Freitas, the stage is not a church of some mysterious exegesis, but rather a hell which brings a lot of joy, but also a lot of work. The pandemonium of her danced nightmares and scripts of desires admits its fascination with mythology and avoids social horizons of reference. It draws power sucking up from itself, from the rhythm of music, from the actual event on the stage.

In this metaphysics which is free from any morality, Marlene Monteiro Freitas is very close to early Buñuel, who pierced a human eye in close-up and allowed us to look into the abyss of primal human fears. Although there actually exists the hand of the perpetrator and the eye of the victim. But the question about crime and morality remains totally on the outside of that mythological moment, which is painted as a pure fact of a primal force.

Marlene Monteiro Freitas combines grotesque with carnival. Her exuberant performances celebrate profusion, polymorphism and ambiguity. Her performance Jaguar, which she created together with the German dancer Andreas Merk, is an evening of imagination going beyond boundaries. Although the lean cat predator does not appear on the stage, there is a colour papier mâché horse – an allusion to the Blauer Reiter artist group. It’s not the only reference in this performance filled with fury. The choreographer, who was already noticed after her group work Of Ivory and Flesh – Statues also Suffer, was also inspired by Stravinsky’s and Schönberg’s music, E.T.A. Hoffmann’s short stories and Adolf Wölfli’s works, as well as the carnival in her home country – Cape Verde.

MARLENE MONTEIRO FREITAS (Cape Verde, 1979) studied dance at P.A.R.T.S. in Brussels, in Lisbon at the Escola Superior de Dança and at the Fundação Calouste Gulbenkian.

In her native country, Cape Verde, she co-founded the dance group Compass and collaborates with musician Vasco Martins. She worked with Emmanuelle Huynh, Loïc Touzé, Tânia Carvalho, Boris Charmatz, among others. Her creations include: Bacchae – Prelude to a Purge (2017), Jaguar (2015), with Andreas Merk, of ivory and flesh – statues also suffer (2014), Paradise – private collection (2012-13), (M)imosa, co-created with Trajal Harrell, François Chaignaud and Cecilia Bengolea (2011), Guintche (2010), A Seriedade do Animal (2009-10), Uns e Outros (2008), A Improbabilidade da Certeza (2006),  Larvar (2006), Primeira Impressão (2005). The common denominator of these works is openness, impurity and intensity. In 2017 Portuguese Society of Authors (SPA), awarded Jaguar, the prize for the best choreography and in the same year she was distinguished by the government of Cape Verde for her cultural achievement.

In 2018 created the piece Canine Jaunâtre 3 for Batsheva Dance Company. Still in 2018 La Biennale di Venezia has awarded MMF with the Silver Lion for Dance.

In 2019, at the invitation of BoCA – Biennial of Contemporary Arts (Lisbon & Porto, PT) creates CATTIVO, a live installation of music stands and other materials that has been re-presented since then.

In August 2020, her new creation MAL – Embriaguez Divina premiered in Kampnagel, Hamburg, counting in 2021 with a world tour.

Still in 2020, it presents Un (common) Ground in various locations in the city of Lisbon, a cycle of exhibitions and conferences that explores the inscription in the arts of the dispute for land that some call Palestine and Israel, the stage of one of the most persistent conflicts the planet.

Marlene has an ongoing collaboration with O Espaço do Tempo (PT). She is the co-founder of P.OR.K, her production structure in Lisbon (PT).