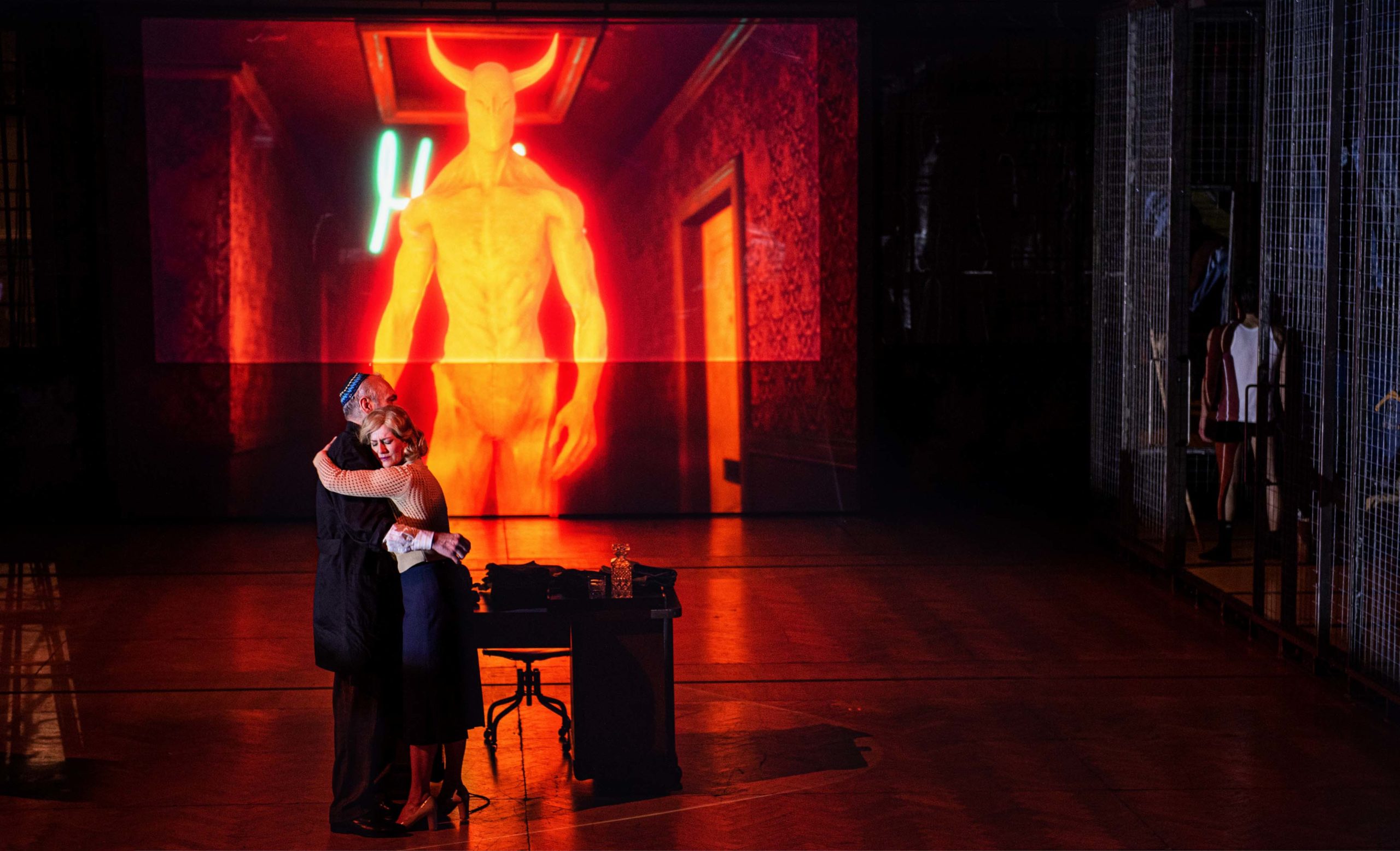 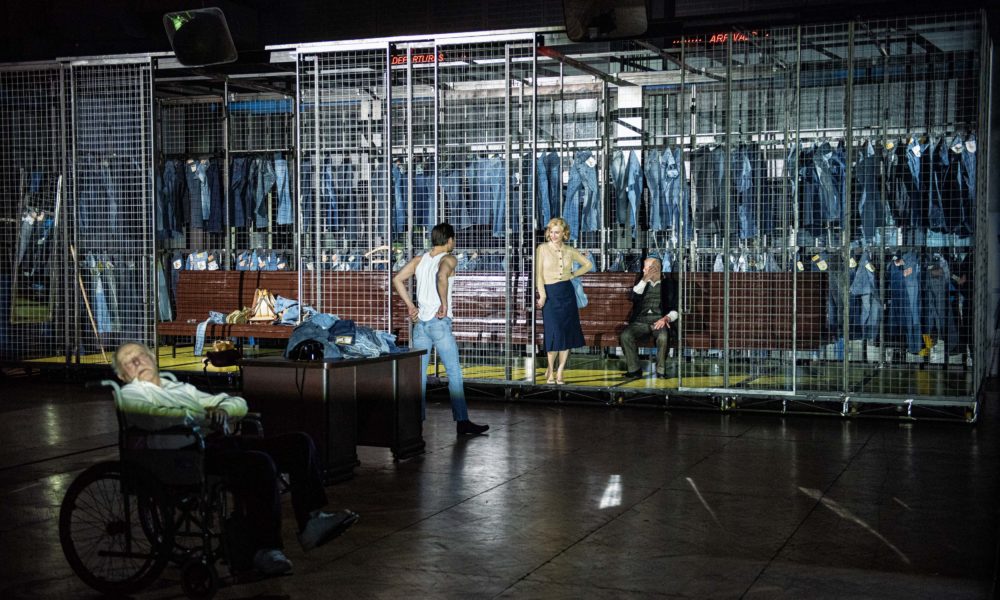 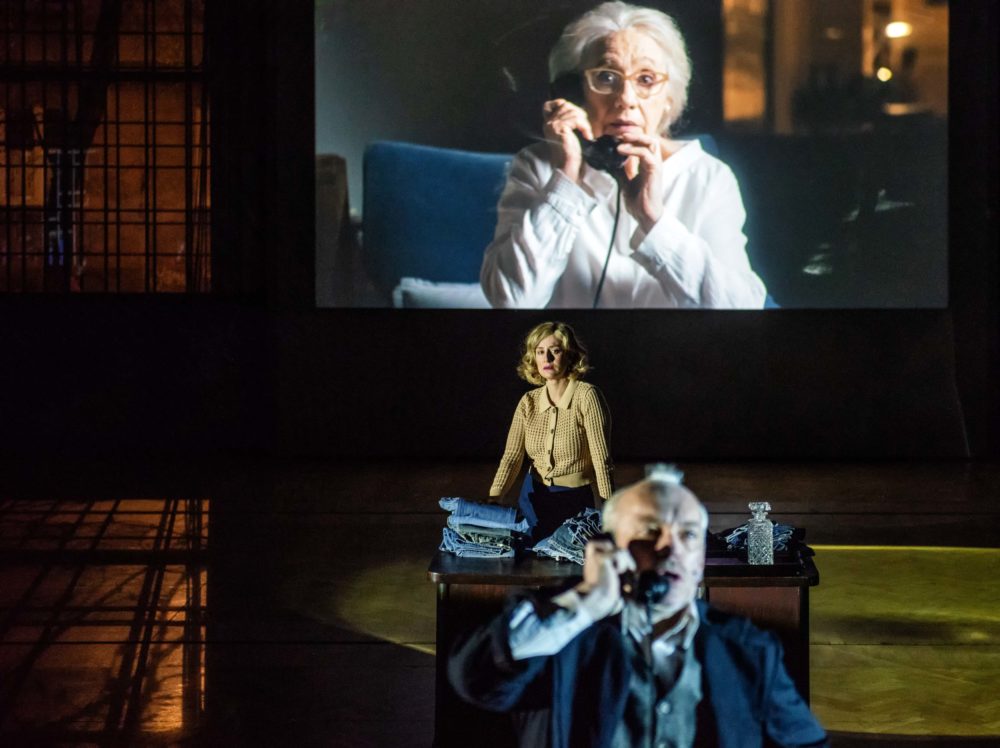 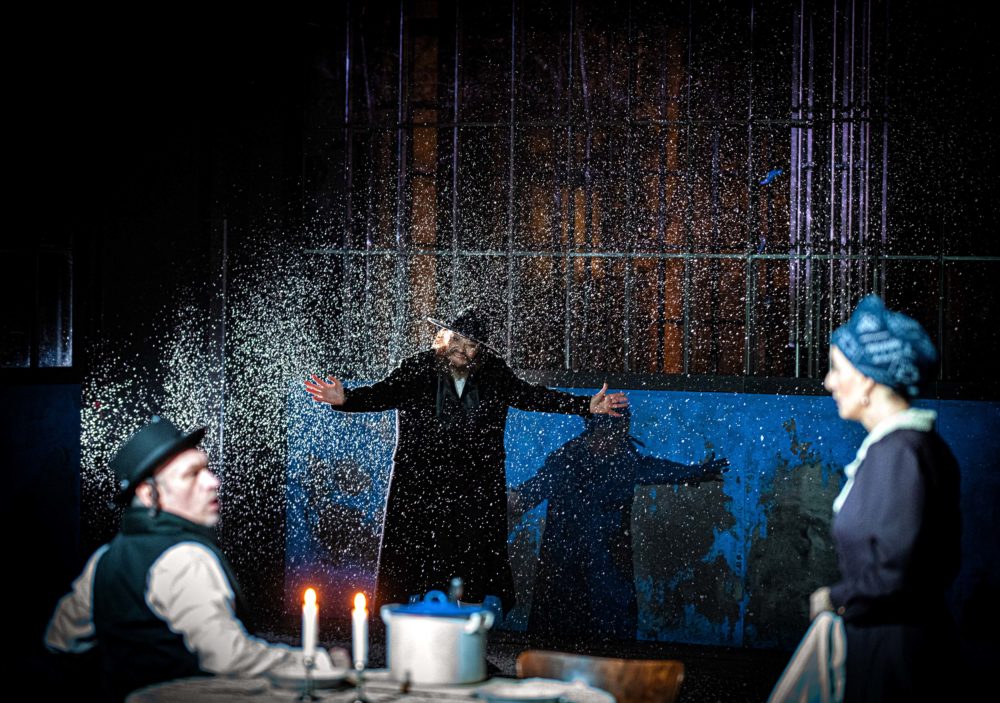 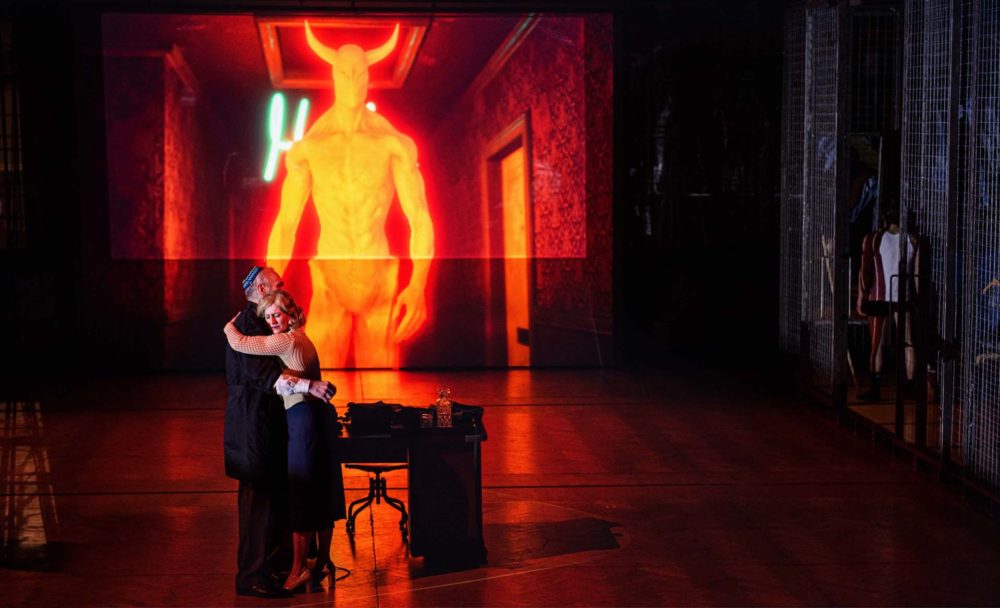 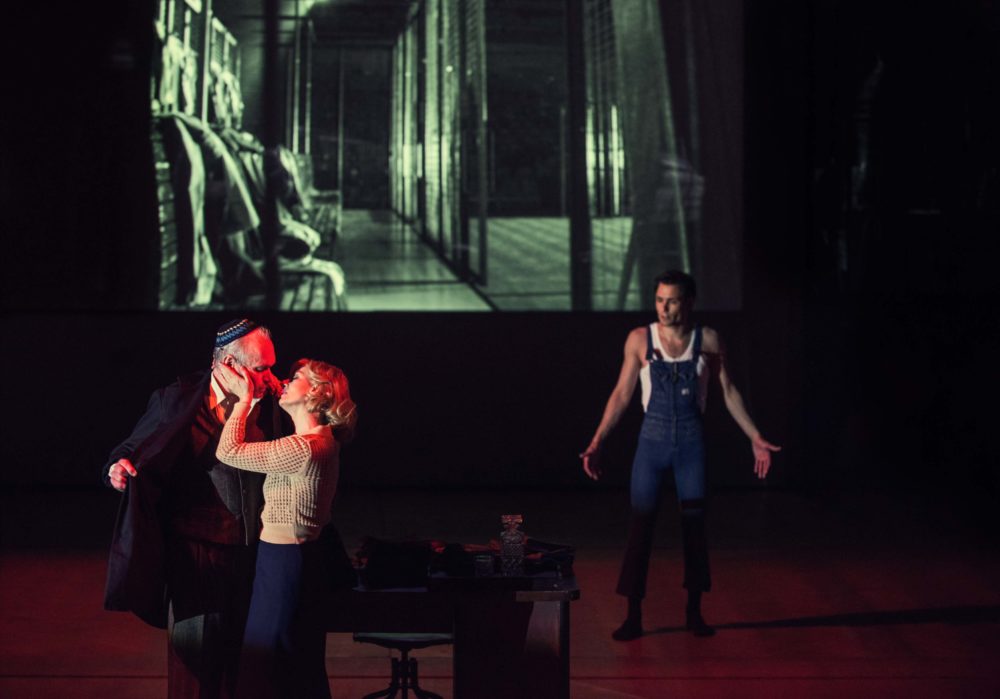 Odyssey. A Story for Hollywood takes us on a journey from Homer and his hero Odysseus to Hanna Krall and her heroine Izolda, a Jewish woman who spent the whole war besting challenges as difficult as any Herculean task, in order to save her husband. Two enormous conflicts: one connected with the first human war – the siege of Troy – the other being the outcome of the second of two World Wars. And as of today, what does it all have to do with us? Where would we like to return to? What does our Hades look like now? Where have all our gods gone? Where is Pallas Athene, who so very much sought to capture Odysseus’ heart? And the Holy Mother who protected Izolda? Have the gods also lost faith in the possibility of happy returns, seeing a future in which our world has set off on an irreversible course? We all live in fear, and all alone cannot do anything about it. We tame it by being flippant.

Homer celebrated Odysseus’ triumphs by referring to the songs of the wondering Aoyds. The story of Izolda, who thinks her life would make a wonderful Hollywood film, has been turned into Chasing the King of Hearts, a novel by Hanna Krall. And what about us being remembered? Is it worth bothering anyone with our stories?

Krzysztof Warlikowski crafts a panorama of unexpected analogies. On a journey of free associations, he leads us through surprising landscapes and constellations of characters, testing our ability to take on another global human conflict, while also offering up a few tested-and-tried ways of surviving.

Odyssey. A Story for Hollywood is part of the „Wandering in search of a home: the Ithaca project” cofinanced by the Creative Europe programme of the European Union.

In Odyssey. A Story for Hollywood Krzysztof Warlikowski yet again searches for a way to speak about the Holocaust. Thanks to the intricately constructed scenario, and exquisite, often shocking monologues, he creates a performance which jerks our consciences and doesn’t let us forget.

Krzysztof Warlikowski created a heart-breaking story which – as a perfect testimony to the theatre of discourse – recalls individual stories and puts them together in a space of departures and returns. The story of Izolda can be summarized by Rebecca Solnit’s words: Stories are our life. Each of us is her own story – a story which can be a prison, but also a lever that we can use to break down the bars of this prison. We create stories to save ourselves, but also to catch ourselves or someone else in a trap; stories lift us up, but they also crash us against the walls of the prison of fear and limitation. Liberation is also a process of storytelling: revealing stories, breaking the silence, creating news stories. A free person has her own story. A valued person has a life in the society in which there is room for her stories (Rebecca Solnit, The Mother of All Questions).

And so Warlikowski’s Odyssey creates a collage of stories, an archive of individual histories and experiences, both authentic and imagined. Particular images in the performance serve to recollect the memory of the Holocaust, although not all of them have the status of a verifiable testimony. Just like photographs and objet trouvé in Christian Boltanski’s installations, they constantly oscillate between truth and fiction, documentation and creation, and finally between representation and presence. According to Ernst van Alphen, when facing a truth which is unbearable, authenticity becomes a problematic matter – eye-witnesses go away, and fiction becomes one of the few still available means to keep up the living truth about the events . (van Alphen, p. 127)

KRZYSZTOF WARLIKOWSKI is one of the revivers of the language of the European theatre. For many years, his productions have been shaping more than just the face of the new theatre. With over ten Shakespearean premieres, the director created a new canon of producing plays by the Stratford author, based on Jan Kott’s interpretations. His interpretation of Cleansed revolutionized thinking about the boundaries of theatre. First productions by Warlikowski in theatres in Poland and abroad were, among others, Hamlet produced in Tel Aviv (1997) and Warsaw (1999), The Taming of the Shrew in Warsaw (1998), The Tempest in Stuttgart (2000) and Warsaw (2003). The director focuses also on classical drama – including Electra by Sophocles (1997) and Bacchae by Euripides (2001) – and on contemporary drama, e.g. West Pier by Bernard-Marie Koltès (1998), Cleansed by Sarah Kane (2001), Krum by Hanoch Levin (2005), Angels in America by Tony Kushner (2007). In 2006, Madame de Sade by Yukio Mishima premiered in Toneelgroep in Amsterdam. In 1999, he began his years-long cooperation with Rozmaitości Theatre (currently TR) in Warsaw, where he produced seven performances. During that time, he directed also abroad – in Zagreb, Bonn, Nice, Amsterdam, Hanover and Paris. In 2000, he debuted as an opera director, preparing in the Grand Theatre-National Opera the premiere of the opera by Roxanna Panufnik The Music Programme. Since then, he created over a dozen opera productions in various countries. Since the beginning of 2008, Warlikowski has been the artistic director of Teatr Nowy, which he established in Warsaw with a group of his permanent collaborators. In May 2009, he directed the first premiere of that theatre – (A)pollonia – based on texts of, among others, Aeschylus, John Maxwell Coetzee, Euripides, Hanna Krall and Jonathan Littell. His following productions in Teatr Nowy are: A Streetcar on the basis of A Streetcar Named Desire by Tennessee Williams as a co-production of Nowy Theatre and Théâtre de l’Odéon in Paris, starring Isabelle Huppert and Andrzej Chyra (2010), The End (2010), based on the texts by Koltès, Kafka and Coetzee, African Tales by Shakespeare (2011), Kabaret warszawski (2013) inspired by I’m a Camera by John van Druten and the movie Shortbus by John Cameron Mitchell, The French (2015) inspired by Marcel Proust’s novel In Search of Lost Time, We are living based on Levin’s play Suitcase Packers (2018) and Odyssey. A Story for Hollywood (2021). In 2011, the movie Gli Italiani by Łukasz Barczyk, starring Warlikowski, premiered. In 2021, the director received the Golden Lion for Lifetime Achievement at the Venice Biennale.